NY Giants Offensive Line: Older and Wiser But Can They Play 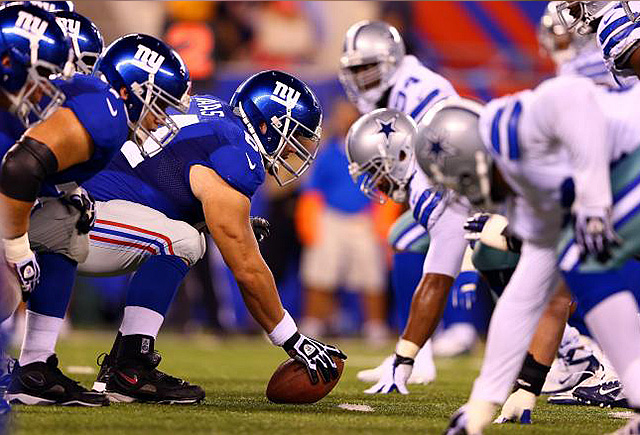 Every new season that comes around, the question is asked of who will need to step up for the Giants to make another run at the Lombardi Trophy.  Whether it’s Hakeem Nicks and JPP staying healthy, Eli minimizing mistakes, or Tuck returning to form, we always seem to look to the stars for the answer.

However, the 2013 Giants campaign hinders on one group of players…offensive line.  Here’s why:  this team’s success is 100% based on how well the Giants can run the ball and keeping Eli Manning upright.

Say what you want about the Giants being an “air-it-out team.” Ever since Tom Coughlin was put in charge, he has had a goal to establish the run game. Running the ball brings more defenders into the box which opens up passing lanes for Eli and gives his wide outs room to work after the catch.

Success starts with time consuming drives.  This keeps the Defense fresh and steals momentum from the opponent.

But what is the state of the Giants offensive line?   All in all, the Giants O-line was pretty decent last year(2012) and only gave up 19 sacks.   The team recently released their initial depth chart and there are no surprises.

LT:  Will Beatty – From the Giants point of view, Will is an up and coming star.   The hope is that he can protect Eli’s back for the remaining of his career.  He just received a 5 year contract with just under $40 million.  Age: 28

LG:  Kevin Boothe – Kevin is on a one year “show me” deal.  He spent most of his career as a backup but over the last two years he has delivered for Eli and company.   Last year he showed much improvement; however, he is not the future. Age: 30

C:  David Baas –  David started all 16 games for the Giants last year.  He took over for long time favorite Shaun O’Hara.  While Baas was adequate, the Giants are hoping he can become more consistent.   He currently has a steak of bad games where he gets pushed around, especially in the run game.   He had multiple surgeries this year, but the spot will be his as long as he can be cleared to play.  Age: 31

RG:  Chris Snee –  Chris Snee is not going anywhere as long as Coughlin’s the coach.  He’s a 4x Pro Bowler, with last year being his most recent trip to Honolulu despite being banged up.  The guard has been taken off the PUP list after hip surgery.  When cleared, he will be the Giants right guard.   Age: 31

RT:  David Diehl– This position has the most intrigue surrounding it this year.  David is a 10 year Giant who has had many great moments, including 2 rings and a Pro Bowl appearance in 2009.  However, in recent years Diehl has been known for injuries and his constant change in position.  Age: 32

He remains on this team because he took a 75% pay cut.   With out it things could be different.  His biggest competition will be rookie Justin Pugh, not James Brewer.  Pugh the Giants 1st round pick is a smart player who will grasp this offense quickly.  O-Line Coach Pat Flaherty has stated that both players will receive equal reps during training camp, yet Diehl has been named the starter.

From the looks of these numbers, the Giants fared pretty well.  The Giants were tied for 8th in point differential.  We must remember that although they missed the playoffs, they did win 9 games.  Had 1 or 2 games gone their way, Big Blue would have been in the playoffs.  The Giants were 23rd in the league for time of possession and that is key for the Giants’ success.

The offensive line as a unit has the experience, the strength and the nastiness, yet their age is starting to show.