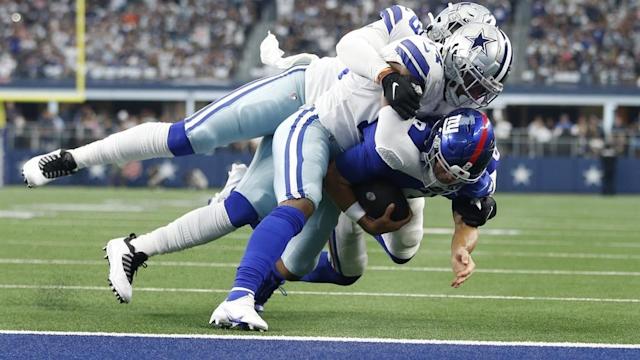 Let’s be honest…Daniel Jones is a gamer.

Jason Garrett is not.

Jones showed this franchise and this fan base what he can do and what he’s willing to do…to bring home wins. Sadly, he has an Offensive Coordinator that’s only good every other week. Garrett was miserable against Denver but rebounded against Washington. Garret bombed vs. the Falcons and called his best game against The Saints. At no point against the Cowboys did the Giants’ offense look dangerous. Lucky, resilient…but not dangerous.

At this point in the season…have we not seen enough?

Jones did not start the game off sharp. And like clockwork…Garret’s inability to clear out space, overload a zone, create mismatches, disguise screens, pull guards, or switch to an up-tempo offense to prevent substitutes is impossible for this Coordinator, leaving Jones on a sinking ship.

I have seen enough. The OLine is severely flawed. What the fan base thinks is easy for a billion-dollar franchise with a history of great lineman has shown to be absolutely impossible. It’s embarrassing. Why the hell did the Giants bring back Solder or not draft or trade for more talent. It’s as if….the New York Giants will NEVER have a good enough line to protect Daniel Jones, so the fans are supposed to just get over it. The kid is screwed…just like Eli Manning got screwed. Terrible.

From the very 1st snap of the game against the Cowboys, the Giants replacement left tackle Nate Solder was backing up into Daniel Jones as he tried to set up in the pocket. Solder was unable to protect Jones. Dan Quinn, the man who designed and coached the “Legion of Boom” defense in Seattle is now running the Dallas Defense. He ran circles around Garretts & Sales protection and Solder has now struggled at Right and Left tackle.

The Giants didn’t have many options to replace the injured Andrew Thomas (Left tackle) because the Giants refused to invest more resources in the offensive line during the off-season. Jones sets up under a patchwork of hard-working players that sadly are not starting NFL-caliber linemen. Against the Cowboys firepower…Daniel Jones was 5-13 for 98 yards before Jason Garrett thought a “naked” bootleg was absolutely the best play to call as the Giants attempted to tie the game in the 2nd quarter.

The play in question that has Jones in concussion protocol is a QB rollout to the weakside (left) with no blocking, hence the name “naked”. The cowboys read the play perfectly and had two players ready to shut Jones down. Jones tried to use his head as a battering ram and was hopeful he could break the goal line with force. Instead, he collided head to head with Linebacker Jabril Cox. Jones was slammed to the turf and when he tried to walk off the field, he stumbled and was not able to leave the field without help. He was then carted off.

I would like to remind you…this team has two fullbacks and three Tight Ends on this roster. You want to play power ball, you line up a reserve lineman, one of your fullbacks, and run behind Kaden Smith and Rudolph. OR…send Booker over the top, which is what happened when the great FOX network had the viewers in a commercial break.

Jones did make a few nice throws under major pressure, including a great throw to Toney with a defender in his face on the sideline for a huge first down. Toney is eclectic, showing some great ball skills and the ability to make guys miss. And you wonder what the outcome of Atlanta and Washington would have been if Toney was being utilized properly.

Jones did miss Barkley on a slant, which resulted in Saquon stepping on the defender’s foot, spraining his ankle. My question is…why is the hell is Saquon Barkley running slants?

You rostered Jon Ross and drafted Kadarius Toney. Use them.

Use the TighT Ends:

I am also asking myself…where is the Tight End play. You need to balance the offense to keep the defense guessing.

The Giants are predictable. Even Engram went above and beyond to make plays with his four catches; however, Smith had zero catches and Rudolph had one. The scheme is bad when you have no injuries…so what now?

Time to take a chance, there is nothing to lose. Rally the troops, give Kitchens a try calling the plays.