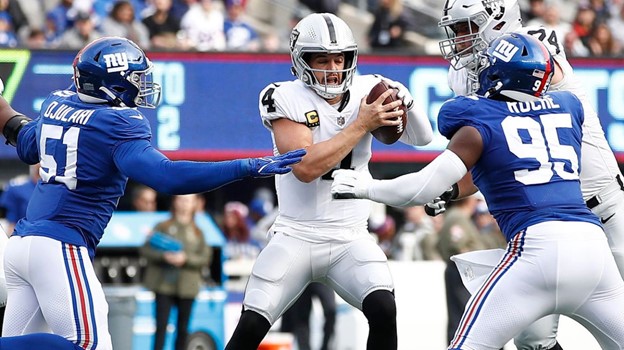 For the most part, drafting is the foundation for any NFL team’s roster. This is especially true for mid-round draft picks. Many fans do not realize just how important mid-round draft picks are. It is extremely common for fans to watch the first night of the draft, and then pay little to no attention on Friday and Saturday. Despite the flashiness of the first night of the draft, and the big names being taken off the board, there are tons of hidden gems available in the later rounds, or even after the draft. If a team wants to build a strong roster with reliable starters, succeeding after round 1 of the draft is a necessity.

If you look back at the Giants’ drafts since 2011, the Giants have had very little success in finding consistent starters in the mid-rounds. Their inability to replenish talent with these picks has heavily contributed to the downfall of the Giants.

However, last week against the Raiders, two Giants rookies have stood out as exceptional playmakers. Azeez Ojulari and Quincy Roche are making an unprecedented splash on the Giants. Ojulari, a 2nd round pick (50th pick in the draft) pick out of Georgia, has already tied the Giants rookie sack record in just 9 games (5.5 sacks).

Roche is actually a 6th round pick by the Steelers that the Giants claimed off of waivers. He had not seen much action prior to the Raiders game, but he showed that he can make critical plays when the team needs it most. Of course, the jury is still out whether or not they will be perennial playmakers, especially Roche. However, they both look promising. This is especially satisfying when you reflect upon the high hopes fans had for Lorenzo Carter and Oshane Ximmines. Carter and Ximmines showed flashes of potential but never proved they could bring it week in and week out. Regardless, let’s hope the Giants can continue to find playmakers with under-the-radar rookies.

How Critical is the NFL Draft after Day One:

For this question, all you have to do is look at the Giants Super Bowl 42 starting lineup to realize how important it is to land talent in later rounds, or even after the draft is over. Of 22 starters for the game, 13 were taken after round one. Plenty of other players who were rotated in throughout the game were also midround picks.

The One That Got Away:

Not that the Giants really needed an extra pass rusher back then, but 3x All-pro Cameron Wake was an undrafted rookie with the Giants in 2005. He would be cut in training camp, and eventually played in the CFL for two seasons before joining the Dolphins.

Knock on wood because Ojulari is killing it, but go ahead and look back at the Giants 3rd round pick history since 2006. You will laugh. Do the names Ramses Barden, Jay Bromley, and Davis Webb ring bell? It appears there is a curse against Giants 3rd rounders. Oh well.