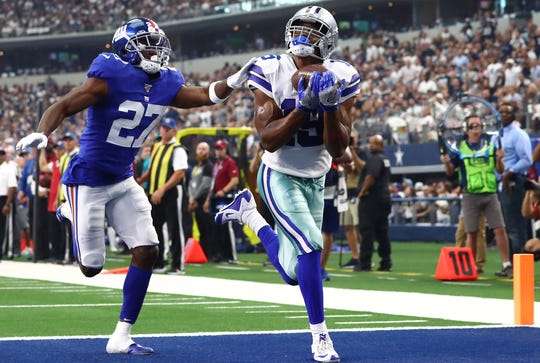 It’s no secret that the Gmen need to drastically upgrade their defense if they want to be competitive in the 2020 season. In 2019 they ranked 25th in yards allowed (377 + per game) and 28th against the pass.

Let’s face it, they had a knack for making average signal-callers look like hall of fame quarterbacks. They ended up cutting Janoris Jenkins before the 2019 NFL season wrapped up and certainly are looking for better performances from the secondary.

With a new coaching staff in place, the defensive backs class of 2019 are on the hot seat. While all three of these players will make the team, they could find themselves sitting behind a newly signed free-agent cornerback.

DeAndre Baker, Julian Love, and Corey Ballantine all had their ugly moments with a few flashes thrown in. The tolerance for Baker not learning the playbook will be minimal under the new regime, especially if they bring in a young veteran cornerback. In this 2nd season, these players get a new start and the ability to take what they learned from 2019 and improve.

Julian Love made an instant impact when he finally received a chance to get on the field. Everyone remembers Love was benched for 10 weeks for absolutely no reason. Look for Love to make great strides in year two. Ballantine had a tough 2019 on and off the field. A new year and regime will help Ballantine grow as a player, though it might be in a limited role. Look for Ballentine to take over in the dime package.

Hamilton, Chandler and Grant will most likely have to make this team with special teams play. Hamilton was signed in 2018 by the Giants after being cut by the Raiders. He was thrust into the role last year he was unprepared for and it showed.

Sam Beal. Dave Gettleman told us all 2 years ago how great he felt about Sam Beal. Injuries have hampered him every step of the way. It is safe to say that 2020 is a make or break year for him. The body of work is so small it’s hard to say what we think he can or can not do. The small body of work was not impressive.

The free-agent class includes several intriguing options. Right from the NFC East there are guys like Josh Norman, Dominique Rodgers-Cromartie, Ronald Darby, Byron Jones, and a few others. As much the fans hate Norman and love DRC, neither will be wearing blue in 2020. Judge is not looking to bring back older vets as per his statement a few weeks ago.

Bryon Jones could be an option since the Cowboys have to pay Dak and Cooper in 2020. Jones is an extremely solid corner that could play safety. His 2019 production was slightly off; however, he is sure tackler and not afraid of contact. Jones is a local kid from Connecticut. This could be a good fit.

Then there are other players who have played well in recent years such as Logan Ryan, Trumaine Brock, Eli Apple, and Chris Harris. Personally, we would like to see how the market plays out, rather than overpaying for one of these individuals. Apple who the Giants know well will not be making a second stint in blue.

The Broncos DB, Chris Harris Jr. is on many teams shortlist, including Raiders, Texans, Jets, and Lions. The Broncos have held strong they are willing to let Harris try out free agency. Letting Harris walk makes the Bryon Jones situation all the more interesting. The Bronco would most likely go right after Jones.

Brock has had some ups and downs on and off the field. He’s bounced between Seahawks, Niners, Vikings, Broncos, Cards, and Titans, he’s also 31. Not a fit for the Joe Judge, New York Giants.

Logan Ryan is a very interesting play. He’s is born and raised in New Jersey and played college ball at Rutgers. He is a very good defender that tackles, has a knack for making key interceptions and on occasion, can come off the edge and get a sack on a corner blitz. Joe Judge is pushing youth. At 29 years old, I don’t know if the rookie coach will think he’s too old; However, Coach Judge is familiar with him as Ryan was in New England from 2013-2016.

Then there’s the draft. First-round picks for the Giants have not worked out over the last few years when it comes to cornerbacks. ie: Baker, Beal, Apple. Looking at some mid-round corner’s might be necessary.