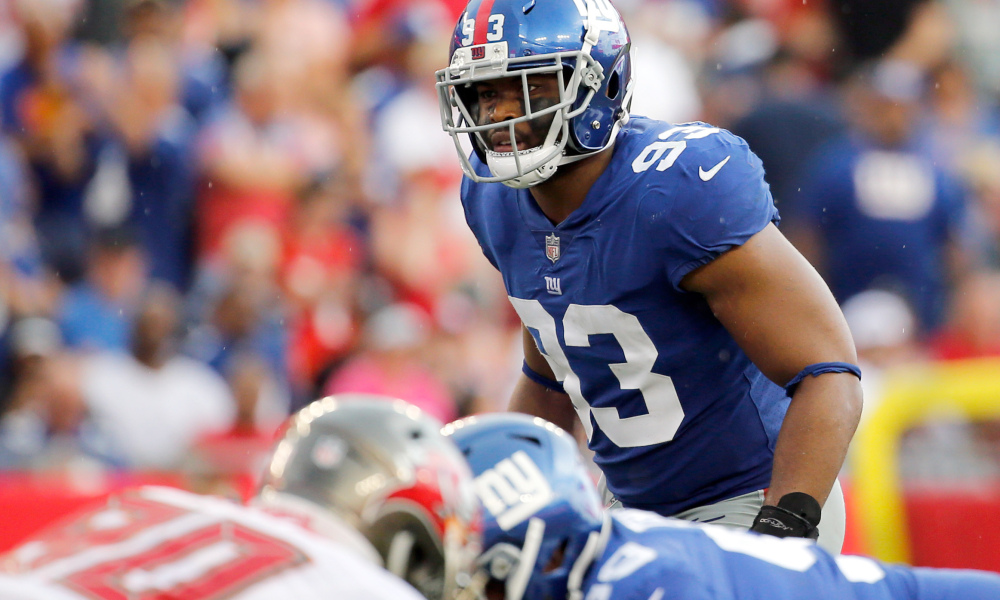 For the first time in several years, the New York Giants should have some decent camp competition for roster spots at the Linebacker position.  The Linebacker spot is still lacking high-end talent compared to the rest of the NFL, but the Giants have added three players (two draft picks and one free agent) to the position this past offseason.  Those players, at the very least, should help provide more depth to a weak position group.

Alec Ogeltree – Unquestioned starter and leader of the defense.  Had a decent, if unspectacular, first season as a New York Giant and will be counted on to progress in Year 2 in Blue.

B.J. Goodson – Excels in the run game.  Has a nose for the football and is a thumper.  The issue with Goodson has been injuries.  Finally stayed healthy for the most part last year, but simply did not make enough plays.  With his contract after this season, time is running out on Goodson to make an impact for the Giants.  I believe he will be surpassed in the lineup by year’s end, if not earlier.

Tae Davis – Davis was a UDFA that played in parts of 14 games last year.  He impressed the Giants with 33 tackles and 2 sacks in his part-time role.  With the Giants still lacking speed at the ILB spot, Davis will be counted on in passing situations and Nickle packages.  If he shows enough moxy against the run, Davis could be the favorite to usurp Goodson as the starter out of camp.

Ryan Connelly – The 5th Round pick out of Wisconsin flashed this spring but will probably be too far behind to make a difference early in the season.  Connelly has a high football IQ and coaches raved about his instincts.  Look for Connelly to start the season on Special Teams, but do not be surprised if his snaps increase after the Bye Week and he is getting regular time by the end of the season.

Expectation: Alec Ogeltree and Goodson will be the starters coming out of camp, with Davis securing the Nickle-Linebacker role.  Goodson will be phased out by the Bye Week, where Tae Davis and Connelly will take the rest of the snaps.

Lorenzo Carter – The Giants are expecting BIG things out of Carter in Year 2.  Carter flashed his skills and athleticism in 15 games last year, recording 43 tackles and 4 sacks in a part-time role.  There is no doubt that Carter will be playing a major role in this year’s defense, and I expect a huge step up in production from him.  He will be a starter and could end up being the Giants best defender by season’s end.

Kareem Martin – James Bettcher brought Kareem Martin over with him last year to help with the transition to a new 3-4 defense (Martin played under Bettcher in Arizona the previous year).  Martin had a very non-descript 48 tackle-1.5 sack campaign in 2018.  Martin will be phased out of this defense early in the season and provide depth at OLB.

Markus Golden – Golden is another former Cardinal that had his best year’s under Bettcher.  Golden had a down year last year after the transition to a new 4-3 scheme.  Golden was also in his first year back from a bad ACL injury he sustained in 2017.  The Giants took a low-risk shot on Golden, and if he can get regain his 2016 form (where he recorded 12.5 sacks), the Giants may have themselves their elite pass rusher.

Oshane Ximines – After skipping on drafting a pass-rusher in the 1st Round, the Giants took Ximines out of Old Dominion in the 3rd Round of the 2019 Draft.  While playing at a small-school, Ximines flashed elite pass-rushing traits that caught Gettleman’s eye.  Ximines produced 32.5 sacks and 51 tackles for loss over his time at ODU.  The Giants will work him in slowly, and Ximines should be a featured pass-rush specialist by midseason.

Expectation: Carter and Golden will be the starters when camp breaks.  Oshane Ximines will be brought along slowly and flash the same way Carter did last year.  Martin will provide good veteran depth against the run.