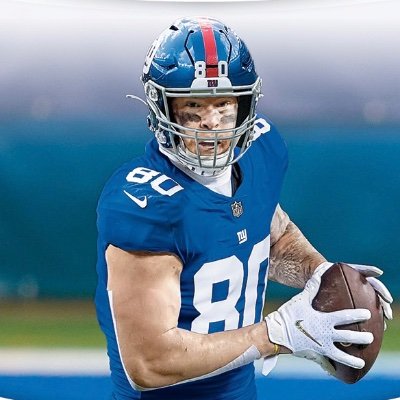 Giants fans are hungry for a certain type of Tight End to line Up for the New York Giants in 2021. For years the fans have been missing the play of players such as Mark Bavaro, and Jeremy Shockey.

In the 2021 free agency period, the Giants signed Kyle Rudolph, the ten-year veteran from The Minnesota Vikings. During his physical, the Giants discovered a fracture in his foot that would need to be repaired, a lingering issue from 2020. The Giants decided to move forward with Rudolph’s contract signing, inking him to $12 million over two years, with $4.5 million guaranteed.

There is no guarantee Rudolph will be healthy come August or September. He is 31 years old and does have 10 years of miles on him. On the other hand, Ronnie Barnes the Senior Vice President of Medical Services for the Giants signed off on Rudolph’s future. That’s good enough for me.

Rudolph is an interesting player. For most of his career, he has been a pass-catching threat and at 6’6 a quarterbacks dream in the red zone. The overachiever made the Pro Bowl 5 years apart(2012, 2017) proving that Rudolph was not coasting through his last contract. This is where the debate of signing Rudolph gets interesting.

While we know all about the Evan Engram shortcomings and issues holding onto the ball, so why not push Kaden Smith to step up and take that traditional Tight End roll. He is 6’5 and a very good blocker. When he does receive targets he catches the ball and can take a hit. I originally thought Rudolph was brought in to mentor a pick like Pat Fieremuth; however, the Penn State Tight End was not drafted.

Rudolph suffered through a handful of injuries in 2020 and saw his targets drop in half in 2019. The Vikings cut the fan-favorite on March 2nd, 2021. There is no doubt that Rudolph wants to show the world he has something left in the tank.

He has also thrived with a revolving door at quarterback: Teddy Bridgewater, Matt Cassel, Christain Ponder, Sam Bradford, Case Keenum, and Kurt Cousins. The 31-year-old has had two down years. However, there is a good reason for it. The emergence of star running back, Dalvin Cook, and star receivers Justin Jefferson and Adam Thielen. The offensive took on a new look with the young stars.

Offensive Coordinator, Jason Garrett should be able to use Rudolph in a similar style that Jason Witten was used. In the flat, down the seem, and in the end zone, moving the chains. He can also block for a healthy Saquon Barkley and be a tandum with Smith executing a two Tight End set. I am a fan of the signing. At a minimum, he should push Kaden Smith and make him better.

“One of the lines Judge said to Rudolph that really resonated with him was, ‘Overachievers aren’t OK with mediocrity. I want to surround myself with a bunch of overachievers,” Rudolph was in.