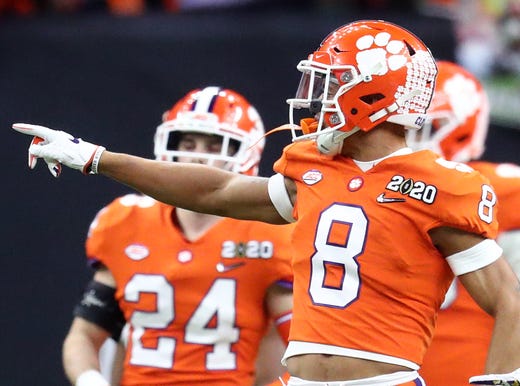 The mock draft is originated from fanspeak.com based on Bleacher Report’s Matt Miller’s Big Board (last updated 3/11/2020).  I pick for the Giants and the computer picks for the 31 other teams.  The computer uses a different big board to select from to make it more realistic since not every team uses the same rankings.

I chose the difficulty level to draft from, which means players won’t fall as far down the draft and the trade value chart will be highly taken into account.  In other words, you don’t have to worry about Chase Young still being available in the 2nd round or trading back and getting five future first-round picks.  Choosing these settings makes the mock draft as legitimate as possible.

A mock draft wouldn’t be fun without some trades, right?  As I was on the clock with the fourth pick, a couple of teams made some offers, one of them being the Indianapolis Colts.

They offered the following for the 4th pick:

I’m not in love with moving that far back in the first round. but considering the Giants don’t have a single pick from the 36th to the 99th pick (back end of the 3rd-round) I thought it made sense to accumulate more picks in the first three rounds.

With most of the top-end defensive talent gone by pick 13, I still was able to grab Wills who can help solidify the Giants offensive line.  Uncertainty surrounds both tackle positions for the Giants, and this would help ease those worries.  Wills has good feet, quick hands, and is very athletic, and should start from day one.

The Giants need to add as much high-round talent as possible on the defensive side of the ball.  Deandre Baker struggled for a large portion of his rookie year, Janoris Jenkins is gone, and there’s not a huge sample size of Sam Beal.  Bringing in Terrell, who has a good combo of size at 6’1 and speed (ran a 4.42 40 at the combine), makes all the sense in the world whether or not the Giants go after Byron Jones in free agency.

Linebacker is an extremely thin area of the Giants defense, and it’s time to invest a high-round selection on the position.  Brooks has a high motor and is excellent as a downhill defender against the run.  Coverage isn’t a strength, but he has the physical tools to add it to his repertoire.

It’s no coincidence a third-straight defensive player is picked.  The Passrush is another area of major need for the Giants, and Zuniga flashed plenty of ability to get after the quarterback at Florida.  Injuries and inconsistency are some of the concerns Zungia brings, but in the 3rd round, no team is getting a perfect prospect. At minimum Zuniga could help bolster the pass rusher in obvious throwing situations, and would hopefully develop into an every-down player.

This pick may raise some eyebrows considering Evan Engram is one of the best tight ends in the NFL when healthy.  The key, though, is when healthy.  Engram just can’t seem to stay on the field.  Bryant can act as a mismatch from the slot and has a decent route tree.  He’ll need some work as a blocker, but mid-later rounds is where you generally find quality tight ends.  Just look at George Kittle and Travis Kelce.