I’m Sorry Peyton Hillis: What can Brown do for Blue? 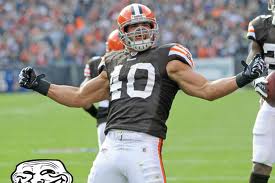 With the Giants emerging victorious in the Toilet Bowl Monday night against the Vikings, one of the biggest takeaways, other than the unsurprising incompetence of Josh Freeman, was the surprising competence of the running backs – Peyton Hillis and Michael Cox.

Now take a step back for a second and imagine it’s the preseason.  You’re talking Giants football with a friend and/or co-worker and he/she says to you, “Going into Week 8, the Giants leading rusher is going to be Brandon Jacobs, and Peyton Hillis and Michael Cox are going to be one and two on the depth chart.”

You either: A. Say “What?” in disbelief that they said something that stupid. B. Shake your head and slowly walk away. Or C. Stand there with your jaw dropped not being able to believe what you just heard.

What you don’t do is say, “That sounds reasonable and/or possible.”

Yet here we are.

Despite Hillis’ best efforts Week 7, to do a David Wilson impression by fumbling on his third carry of the game, he was very effective, although some of his numbers might not show it.

On the surface, 18 carries for 36 yards and a touchdown doesn’t look like much, but when you add in 5 catches for 45 big yards, Hillis has already been the most efficient and successful running back on the Giants this year.

On the other hand, Cox rushed 11 times for 23 yards in his National Football League debut, not eye-popping, but certainly good enough for a seventh-round pick.  He should warrant more carries in the coming weeks, especially since he managed not to fumble, unlike Wilson in his debut.[1]

With Jacobs sidelined this weekend against the Eagles with his hamstring issues, the backfield will likely consist of only Hillis and Cox, which is strangely alright with me, especially if John “Kindergarten Cop” Conner[2] is leading the way.

Conner’s presence has been felt, as since he has been activated, the Giants have arguably had their two most successful games running the ball.  Couple that with the continued gelling of the offensive line, and things begin to trend in the right direction for the Giants’ running game.

Also it is important to not forget that Andre Brown will most likely be activated from Injured Reserve Week 10, according to Art Stapleton of The Record.

While Brown, who nearly won the starting job out of camp, can provide an important shot in the arm to the Giants’ paltry running game, he may also be in the process of being Wally Pipp-ed out of a job.

If Hillis, Jacobs, and Cox all continue to perform admirably, and Wilson presumably returning from injury at some point, it’s hard to imagine the Giants carrying five running backs, especially when they are carrying three quarterbacks.

When it comes to making personnel decisions, an attitude of “What have you done for me lately?” often prevails, which makes Brown the odd man out, unless Hillis’ production falls off a cliff or he shoots himself in the leg or something.

What a crazy season.

I’m going with Hillis this week, but it’s totally a crapshoot at this point.

Don’t take that to the bank, though, could just as easily go 5/3/0 this week.

Joe Vasile is a play-by-play announcer for Widener Pride football and host of “Ball Four” on WTSR in Trenton.  Follow him on Twitter at @JoeVasilePBP.

[1] Boy, I’m really mentioning this a lot today.  I’d like to say for the record, I don’t hold a grudge against Wilson for the fumbling issues.

[2] His nickname is “Terminator,” but I will call him by other Schwarzenegger movies, thank you very much.