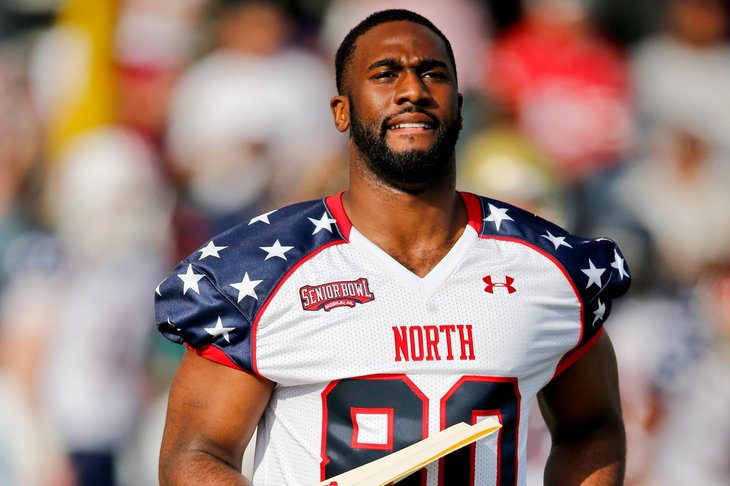 There has always been a formula to winning a Super Bowl.

If you’re a risk taker and it works…continue to take the long shot and give that special player a chance.

If you take the safe pick or the best athlete on the board in NFL draft and it works…see who falls into your lap and call his cell phone on draft day.

There is a formula to winning and over the last decade and half the New York Giants have built their team around the defensive end, highlighted by players like Michael Strahan, Osi Umenyiora, Justin Tuck, Mathias Kiwanuka, and Jason Pierre Paul.

New flash: Osi Umenyiora is gone.   Justin Tuck has not been a force in 2 years, Kiwanuka still moonlights as a linebacker and JPP lost his sack production.  In 2013 there is very polished player slowly rising up the NFL draft board that could be a great fit for the New York Giants.

Answer: Alex Okafor, defensive end from Texas will most likely be available at pick 19 in the 2013 NFL draft and could be the successor to Osi Umenyiora.   The 6 foot 4,  264 lbs end plays more like Jason Pierre Paul than Osi, as he is not afraid to use his hands and drive down inside the line to make a tackle in the trenches.

One major attribute that Okafor brings to the table is his closing speed.  His burst off the line is impressive even when  he overwhelms a handful of average college tackles; however, once inside the hashes he can burst to the quarterback with world class speed.   Not many college running backs or college quarterbacks can escape Okafor once he sheds his initial block.

Okafor has great arm length and hand strength that delivers him great leverage at the point of attack.  The defensive end capped off his final game at Texas with a 4.5 sack performance in the bowl game against Oregon State.  At he NFL level Okafor could play outside linebacker as he is just as effective standing up as he is in three/four point stance.

He also never gives up on a play and will follow the ball carrier down field to make the tackle.

Watching a handful of interviews with the Alex Okafor he comes across polished, confident young player that could be a great fit for the New Giants at pick #19.   You will especially like the point in the above interview where he talks about the art form of the bull rush.