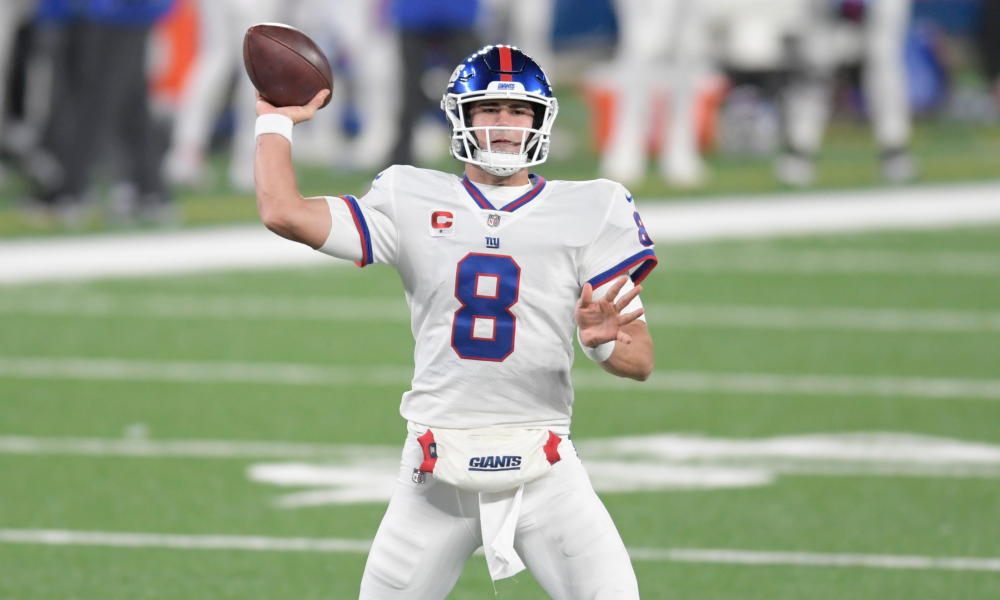 The New York Football Giants started the 2021 season 0-3 and were desperate for a win.  The 2-1 Saints were favorites by 7 points as they hosted the Giants in their first game back in New Orleans.  The GMen were coming off another winless September and had let the 2 previous games slip away, thanks to last-second field goals against Washington and Atlanta. The Giants continued to give heartburn to an already agitated fan base.

This was always going to be a defining year for Daniel Jones and ultimately, the direction of the franchise.

After last week’s loss, I acknowledged here that DJ made some nice plays but it simply wasn’t enough.  Yes, he played great in Washington.  Yes, he has cut down on turnovers.  But at some point, you still needed to see the 6th overall pick go above and beyond and will his team to victory.  Against New Orleans…he delivered.

Jones delivered in New Orleans when the team needed him most.  When they were down 11 in the middle of the 4th quarter we all were thinking that the Giants were in a perfect position to lose again and remain winless.  Jones proceeded to post the first 400-yard passing game of his career as he completed 28 of 40 passes with 2 TDs and 1 INT.  The INT wasn’t even real…as it came on a last-second hail mary to end the first half.

DJ showed command and control early and often in this game.  The 52 yarder to John Ross was a special throw, into double coverage placing the ball so perfectly in the arms of Ross that there was no other choice but to catch it.  At the line of scrimmage, he makes sure all 11 players are singing from the same sheet of music.  Numerous times you could see him directing Toney where to line up and motion pre-snap.

I noticed more progressions to 2nd and 3rd receiving options by Jones as opposed to when he locks on to one target.  The in-breaking routes to Golladay were a nice example of that.  You could see DJ drop back and scan the field, then deliver a complete strike right into tight windows that allowed Golladay to use his body to shield the defender and make the reception.

DJ built up confidence throughout the game with every pass thrown with deadly precision.  DANNY was throwing DIMES.  He always had shown glimpses of accuracy and zip on his throws, but he really displayed what he’s capable of Sunday in New Orleans. He was dialed in.  Aside from the 52-yard dime to ross, there were several plays that stood out for me.  It does not look like much at the time but he had a crossing route to Engram where he had pressure in his face, sidestepped, and put it between the 88 on Evan’s jersey.  An inch off on that simple 4-yard pass could’ve been a pick 6, but due to the ball placement and his confidence, he delivered a strike.

I could feel myself thinking I was watching the same game as the previous 2 weeks which provided back and forth games where the Giants did just enough to lose but DJ had that swagger/confidence about him.  Everyone has been starving for playmakers that could step up and MAKE those winning plays to sway those close games into the victory column.  Down 11 points in the middle of the 4th quarter, Daniel Jones threw the organization on his back and willed this team to their first win of the season.  A 54-yard touchdown pass to Barkley down the left sideline was the start of it.  DJ hit him in stride so Barkley didn’t have to slow down.  Jones proceeded to run in a 2 point conversion to cut the deficit to 3 points, then with 3 minutes left he drove his team into range for Gano to tie the game with a field goal.  In overtime DJ made sure when they won the coin toss, they won the game.  He started the drive with a 17-yard bullet to Ross on the right sideline and hit him on an 8-yard slant a few plays later.  An 18-yard screen for Barkley helped overcome a 2nd down and 14, and then on a 3rd down DJ hit Golladay for a 23 yarder.  That set up Barkley for the game-ending 6 yard TD run.

With no running game, an offensive coordinator holding him back, and a patchwork offensive line, Jones shined.  I know it’s popular to criticize Garrett, but he is holding Jones back and I do not want to see it ruin DJ’s career.  I think it’s fair to give Garrett credit for training and developing Jones to limit the turnovers.  But when it comes to the overall scheme, route concepts, and playcalling, they must improve.

When Jones is placing the ball on the money to his receivers, I feel it’s more about Jones development than it is about coaching.  They should have scored 45 points in this game but Garrett isn’t letting that happen. I won’t get too much into Garrett now because this is DJ’s time.

I said he needed to play above the X’s and O’s, and he did exactly that.  DJ is our guy.