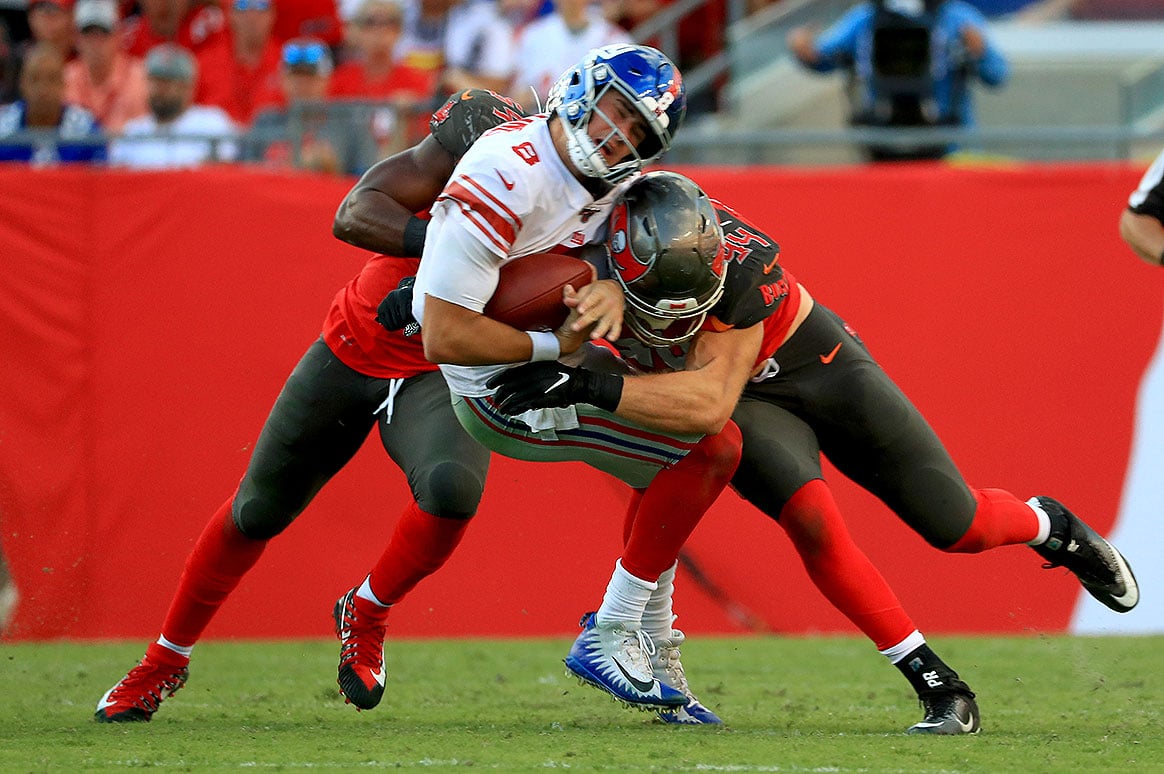 I want to make one thing clear.  I didn’t want to write this article on Daniel Jones this week.  Here at NY Giants Rush, we are Daniel Jones believers.  That’s why it pains me to write up yet another Film Room article based on the bad play of quarterback, Daniel Jones.

Let me make another thing clear, it wasn’t all bad Monday Night.  Daniel Jones accounted for two BEAUTIFUL touchdown passes that kept the New York Giants in the game.  This is what makes Daniel Jones one of the biggest enigmas in the NFL right now.

The biggest issue continues to be back-breaking turnovers from the 2nd year signal caller.  The Giants went toe to toe with the best the NFC (and maybe even the NFL) had to offer.  Yet, Jones missed several big-play opportunites and turned the ball over twice (34 in 20 games; 2nd to Ryan Leaf for most EVER in their first 20 games).  The result? Another heart-breaking L for the New York Giants.

How it Began: 2nd and 8 early in the 3rd Quarter with the Giants up 14-6.  After a great Dion Lewis return to set them up on their 44 yard-line, the Giants had a chance to gain even more momentum.  At worst, you end up going 3 and out and punting the Bucs deep into their own territory and you maintain momentum.

How it Ended: Jones had Slayton here early.  Shoot, he even started his dropback looking Slayton’s way to start the play, but decided to come off of him early (maybe expecting the pressure to be there).  He also had Shepard at this same time if he just pulled the trigger at this very moment.  Instead, Jones held the ball, hesitated (a common theme with most of his bad plays), then allowed the pressure to get to him.

Shaq Barrett eventually comes in to affect his throw to Shepard, which was ILL advised, to say the least

JUST TAKE THE SACK PART I

After the interception, Brady converted the short field into 3 points and allowed the Bucs to get back into that game.  Those 3 points ended up being massive of course.  A game-changing/momentum-shifting play.

How it Began: On the next possession, Jones and the Giants had a chance to steal back momentum.  Shepard ran a double move and smoked cornerback Jamal Dean (a common theme Monday Night) for what should have been AT WORST a 30+ yard gain, if not a walk-in TD.  This would have essentially iced the game for the Giants.

How it Ended: Jones overthrew it by an inch, and it was yet another missed opportunity.  You can argue that Shepard looked back too early and should have just kept running his route.  Maybe he catches it at that point, but it’s still another HUGE missed opportunity that Jones has to hit on.

How it Began: After starting with great field position yet again, Jones drove the team to the Tampa 32 yard-line.

How it Ended: Instead of taking the sack and living to fight another down (It was only 2nd and 5), while in the grasp of Shaq Barrett, Jones attempted to make yet ANOTHER ill-advised throw to Golden Tate.

The ball was again, predictably picked off.  Brady took the Bucs down the field for a Touchdown to take the lead for good.  Both interceptions were thrown after getting great field position with chances to, at least, change the field position.  At worst, he took points off the board.  Instead, the interceptions led to 10 points by the Buccaneers that totally changed the course of the game.

We can live with the overthrows and missed chances, but what Giant fans can’t live with are costly turnovers in big games.  The chances were there, all game long, to beat one of the best that the NFC had to offer.  Jones had a chance to stave off the New York media frenzy calling for his head.  The young signal caller missed his chance Monday Night.

Far be it from me to give up on a Quarterback after only 20 starts.  I am not there yet, and the calls to have Jones benched are ridiculous.  However, my patience is growing thin with Danny Dimes.  Jones needs to learn when to live to fight another day.  This team is not talented enough to overcome his countless mistakes.

I’d be remiss if I didn’t mention how Jones bounced back and led this team to what could have been a game-tying drive at the end of the game (if he wasn’t late on throwing to Dion Lewis for the two-point conversion to tie the game up).  The eight-game trial that ensues could decide Daniel Jones’ fate as The New York Giants Franchise Quarterback.