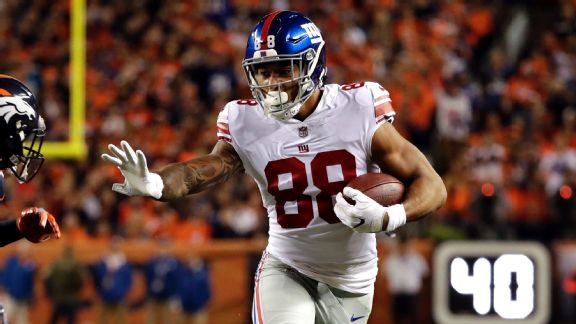 Film Room: Engram’s Tumultuous Season Ends on a Bad Note
The New York Giants ended their season on a positive note by beating the Dallas Cowboys in their final game of the season. Unfortunately, the same can’t be said for Evan Engram, who ended his roller coaster season on a bad note. Sunday was another bad game filled with drops that led to more turnovers.

The injury-prone Tight End was able to finally put together a full 16-game season. Many, including myself, thought that would lead to a big season where Engram would cement himself as one of the better Tight Ends in the league. Engram made the Pro Bowl (somehow), but his ability to create negative plays for this offense seemed to outweigh any positives that he
brought.

Sunday vs The Dallas Cowboys:

Let’s start with the obvious. With the score 20-9 to start the 2 nd Half, the New York Giant defense forced Dallas to go 3 and out on their first possession of the half. The Giants had all the momentum and were looking to put a good possession together to put the game out of reach.

On 2 nd and 10 from their own 42-yard line (great field position), Jones threw a perfect strike to Engram that would have put the team in Cowboy territory for a 1 st down. Then this happened…

Another dropped pass leading to an Interception. Dallas took the subsequent possession in for a Touchdown to make the game 20-16 and changed the complexion of the whole game.

On the next possession, with the Giants backed up to 1 st and 25 from their own 38-yard line, Engram sabotaged another great throw from Jones. Jones threw another perfect ball to Engram that would have put the Giant offense back on track to 2 nd and less than 10 yards (should have been 2 nd and 7 at the Cowboy 44-yard line had it been caught).

Somehow, this ball was dropped. This led to it being 2nd and 25 with no chance to convert a first down. Another possession killed by Engram.
As was mentioned on The Giant Guys podcast, Engram simply has his hands too far apart to catch the ball. One would think that Engram would have figured this out by now. Here we sit though, after another multi-drop game from Engram, contemplating whether he has any future with the New York Giants organization.

I have been an Engram-backer for too long now. I can only take so much egg on my face. The drops have not stopped, and they keep costing this Giant offense points and possessions. At some point, Engram needs to be held accountable. I have seen enough to warrant a trade of Evan this offseason for the better of Daniel Jones.

I have no doubts Engram will go on to succeed elsewhere because it is clearly a mental issue for Engram. A change of scenery might help. I am sad that him succeeding as a Giant Tight End simply does not appear to be in his future.