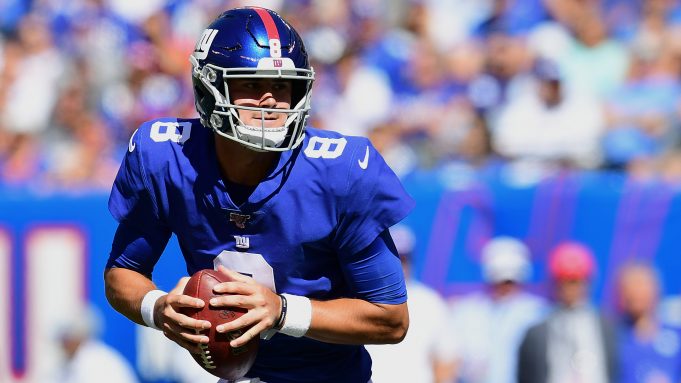 Daniel Jones has gotten off to a nightmarish start in 2020.  There are a plethora of reasons behind his sluggish start, including Jason Garrett’s bad play-calling and play designs, lack of weapons at the Wide Receiver and Running Back positions, or one of the worst pass-blocking Offensive Lines in the game right now.  Throw in having to learn his second system in two years in the NFL without a real offseason, and you can understand why a young Quarterback would struggle.

Having said all that, this is the #6 pick in the 2019 draft.  When you take a Quarterback that high now and days, you need to see immediate returns.  After a solid rookie year, it was expected that Jones would take another step up in his development.  That has yet to materialize so far.

There are more holes in Jones’ game than a block of Swiss Cheese at the moment.  Let’s dive into all of those issues, which can be seen in full display on Sunday.

Early in the game, Jones had an open Ratley for a long first down.  As you can see below, Ratley has some decent separation.  This is OPEN in the NFL on a comeback route.

Jones needs to hit him leaning to his outside, but instead, Ratley is needing to dive here to even attempt to make the catch.

On 4th down late in the game, Jones had an open Tate for a first down that would have put the Giants in position to score a TD, but as you can see, Jones through the ball high and wide instead of on the numbers and the pass goes incomplete.

What you cannot see from the still-shot is that Tate’s momentum was taking him to the middle of the field, so the catch was made even harder by not being in front of him.

The Giants were driving for a Touchdown in the First Half, with the ball around the 15-yard line.  Jones had his favorite target in Slayton one-on-one at the bottom of the screen.  The ball needed to be thrown at this very moment, but Jones is not even loaded up and the ball then comes out late.

This allows the DB to get back into the play and Slayton has to stop his route for fear of not having enough space.

For a team that is struggling to put the ball in the End Zone, you need to cash in on plays like this when they are there.  The missed throw led to yet another field goal.  Jones is simply not doing that right now.

Here is another situation with Slayton in the 2nd Quarter.  The ball should have been out of his hand, but instead, Jones hesitates and allows the DB to get back into the play and has smaller window to throw to.  Result? Incomplete.

The final dagger came on the Giants last play.  Daniel Jones, with over a minute left in the game, had drove the Giants down and put them in position to have a chance to tie the game.  In a similar theme as the Steelers and Bears game, Jones came up short once again.

Jones had a decent pocket that opened up to allow him to make a throw or scamble for 10 yards if he choosed to do so.  Jones’  decision-making failed him again.  Instead of running, Jones decided to make a throw to Ratley once again.  Ratley being one-on-one, had a step on his man early, and if Jones pulled the trigger, could have had a chance for a connection.

Instead, Jones made a late, off-balance throw to Ratley.  The ball did not have nearly enough juice on it, and was thrown low and inside instead of high and outside.  This allowed the DB for the Rams to close on the ball and make a fantastic Interception to end the game.

After last year, I was nearly certain that Dave Gettleman made the right pick in selecting Daniel Jones.  That thought process still remains, but it’s hard not to worry just a little bit about what we are seeing progress on the field over the first four games of 2020.

As I mentioned earlier, there are a plethora of reasons that could be leading to Jones’ lackluster play.  At some point though, there are issues that Jones can control.  His lack of awareness in the pocket is still evident.

What I have more issue with is that his accuracy and aggressiveness in the passing game have gone by the wayside in 2020.  Couple that with bad-decision making and you have yourself some questions about Jones’ long-term prospects as a New York Giant franchise Quarterback.