Pilgrim’s Point: Are you ready to believe 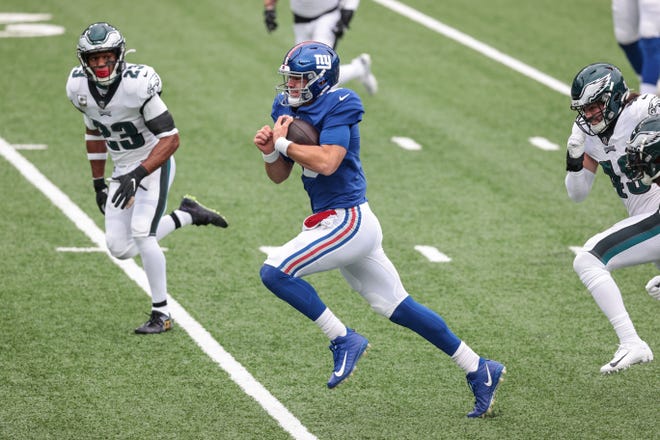 It’s been a long time since Giants fans could feel good about their football team in November.  On Sunday, the Giants defeated the Eagles 27-17 at Metlife Stadium.

Coming into this game, we felt a little better about Daniel Jones.  He just completed a game with no turnovers which is something to celebrate in his young career.  His clean sheet helped the Giants get past their division rival from Washington.

We’ve already seen DJ play well against them though.  He needed to pass another test.  DJ won his first NFL start against Tampa Bay, I’m sure you remember.  He looked incredible.   Since then, Jones hasn’t beaten another team in the NFL besides Washington.  Look it up, it’s true.

A team that the Giants haven’t beaten since 2016.  The Eagles have absolutely owned the Giants.  And yes, I cringed when I wrote that.  A familiar opponent that the Giants lost to in heartbreaking fashion only weeks before.  The score was 22-21.

The Giants looked like a different team this time.

He was poised and in control of himself and the game.  He was figuring out what the defense was showing and adjusting the play as needed.

Thanks to a young offensive line paving the way for a running game, Daniel Jones did everything he needed to.  This included a 34-yard Touchdown that he took to the house himself, setting the tone for the afternoon.  He protected the ball and he made good throws when he had to.  Want to know why he didn’t throw for any touchdowns?  He didn’t have to!  Wayne Gallman punched his ticket into the endzone twice and DJ was a holding penalty away from 2 rushing TDs himself.

I’ve been one of the critics of Daniel Jones.  I couldn’t stomach the fact that he was responsible for 2 turnovers weekly while we consistently lost close games.  This season was going to be about progressing and not competing.  Yet I still judged him for what I saw and not what he could become.

This is a small sample size, but it’s also the most optimistic I have been about our young Quarterback since his first NFL start.

The Giants are headed in the right direction. They are well coached in every area of the game.  They are young and they are improving.  It’s everything you wanted to see by this time of the season.

With Daniel Jones playing like he is, it removes the question of quarterback from the conversation.  Should he continue to play like this, there will be no doubt.  This allows the Giants to improve other areas of the roster as the team continues to build a foundation.

Enjoy the bye week.  The Giants are playing meaningful football in November and that’s awesome.  It’s helpful that the Giants play in a historically bad division.  But who cares.  It’s not just about this season.  It’s about the future.  It’s bright.