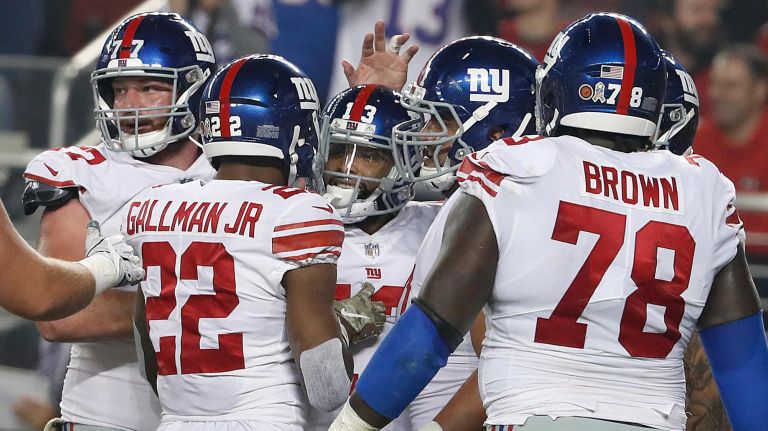 Brown is a huge improvement: A tad inconsistent

Jamon Brown has been a welcome addition to the New York Giant since joining the team in November.  Brown started 16 games for the Los Angeles Rams last year but was replaced during a two-game suspension.  He never earned his role back.  He was cut by the Rams in order for the team to sign Dante Fowler Jr.  The New York Giants were in a great spot due to their waiver wire status and were able to sign Brown just a day after landing on waivers.

Since being picked up, the offensive line has gained some serious stability that it once lacked.  Brown, for his part, has helped immensely on the right side.  While nobody would confuse Jamon for being an All-Pro Right Guard, his play has been MUCH better than Patrick Omamhe’s, which has also helped Chad Wheeler play better at Right Tackle.

The hulking Right Guard is a very powerful man who excels at run blocking.  What we have seen from him so far is what was expected.  Great run blocking and inconsistent pass blocking.  In a lot of ways, Brown is very similar to last year’s right guard, D.J. Fluker.  Since being inserted in the lineup in the 49ers game after the bye, the Giant running game has been fantastic.

Overall, Brown has been positive for the Giant offensive line, but he did not have his best game Sunday versus the Redskins.  He took on a tough opponent in Daron Payne for the Redskins and did not seem to fare too well.  Keep in mind, Payne will be doing this to many Right Guards over the course of his career, as he is a VERY solid player.

Sunday vs the Redskins

Brown had difficulties keeping up with Payne’s power and speed all day Sunday.  He did win the matchup in the run game but was beaten several times on passing downs which killed several drives.

Giants first drive of the game.  They were driving into Washington territory when they faced a 3rd and 3.  Brown was beaten by Payne quickly to sack Manning.  Wheeler also got beat which did not allow Eli the ability to escape.

On one of Barkley’s fascinating runs (which netted 10 yards but should have been a 2-yard loss), it was Brown that got beat quickly again, which forced Barkley to cut back quickly, break a tackle, and turn a bad play into a good as only Barkley could.

On that same drive, Brown committed a false start.  Then with the Giants facing 2nd and Goal from the 3-yard line, Manning dropped back but had pressure in his face immediately from Payne yet again.  Brown was beaten quickly, as was Wheeler and that turned into a 16-yard sack which the Giants were unable to recover from.  Brown had a big hand in killing this drive that ended with 3 points instead of 7.

In the end, Brown was not terrible but was a pretty clear choice for “Dud of the Week” in a game that was played damn near perfect by the New York Giants.  When it is hard to find a clear Dud, that is a good Sunday in the NFL.  Brown should bounce back the final three games.  He is a very good candidate to get resigned and be a part of the Giants future.