Giants Trade Back for Kadarius Toney 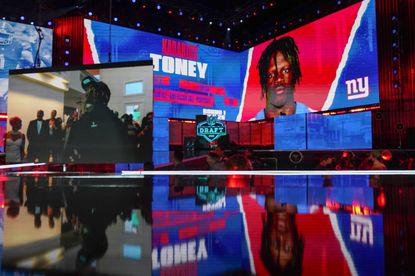 Dave Gettleman and the New York Giants shocked the NFL Draft world last night.  Gettleman, the man who has never traded down before, got on the phone after Jaylen Waddle and DeVonta Smith were taken and decided to get great value.  Gettleman traded back nine picks with the Chicago Bears to position 20 and managed to still get an offensive weapon for Daniel Jones.  Some (read: Me) may call the trade an absolute fleecing!

If you graded the Giants First Round on that trade alone, I would give it a solid B+.  The Giants then selected Wide Receiver, Kadarius Toney, out of the University of Florida.  What the Giants get in Toney is a dynamic athlete that is only scratching the surface of what he can do at Wide Receiver.  Toney was a High School quarterback and even came to Gainsville under the premise of playing quarterback.  Florida coaches realized after a few snaps that Toney’s highest potential was out in the open field at Wide Receiver.

Toney received 150 targets and dropped three. Toney’s 4.37 40-speed presents problems at every level of the field.  He will line up behind the line of scrimmage on sweeps and reverses as well as in the slot and the outside. The days of misusing Shepard and Engram are over). Toney can burn a cornerback on a “Go” route down the field, and he can shake the HELL out of cornerbacks underneath on short routes.

Kadarius’ twitch and start/stop athletic ability are rivaled by few in this draft class and even in the NFL.  He will rarely get tackled by the first man that attempts to corral him and has the toughness to fight through tackles and balance to keep plays alive when they look dead.  Toney also adds a lot of value in the return game where he can return both kicks and punts early in his career to help the Giants Special Teams.

The most-exciting part about Toney is that he was mostly used as a gadget player his first three seasons at Florida.  He has a high “football IQ” and being a former quarterback, he has the ability to read defenses and get open with ease.  Toney still has work to do learning the nuances of route-running and how to improve his steps and tempo.  These are traits that can be learned in the NFL, but you can’t teach speed and the type of athleticism and playmaking ability that Toney brings to an offense.

Not a Perfect Prospect:

There are questions about Toney, forcing him to slide to the bottom half of the First Round.  He has had some questionable off-field decisions that have led to run-ins with the law back in 2018.  The hope is that he has grown and learned from those mistakes.  Toney also has a bit of an injury history with his shoulder causing him to miss time twice during his collegiate career.   As I mentioned earlier, he is still learning how to perfect his route-running, so that is still a work-in-progress.  Toney will not take on major snaps in year one.

If you didn’t notice my excitement before, I will tell you now……I love the moves Dave Gettleman and Joe Judge made last night.  Draft picks in next year’s draft are more valuable than this year. A full college football season will bring new opportunities for players.  For that reason alone, the Giants getting the Bears’ first pick in ’22 (the Bears are not great) is a steal.  Add to that a 5th rounder that the Giants were missing this year, and I love the trade even more.

For a team that lacked Wide Receivers that separated and had game-breaking talent, Toney is a welcome addition.  Jason Garrett had to have had something to say about drafting Toney. His job (literally, his job is on the line) will be to get Toney the ball and get the best out of him.  If Toney shows he can succeed in the slot in the NFL, Sterling Shepard’s long-term position on this team could be in jeopardy (especially with his salary and injury history).