Barkley Out: State of the Giants 2020 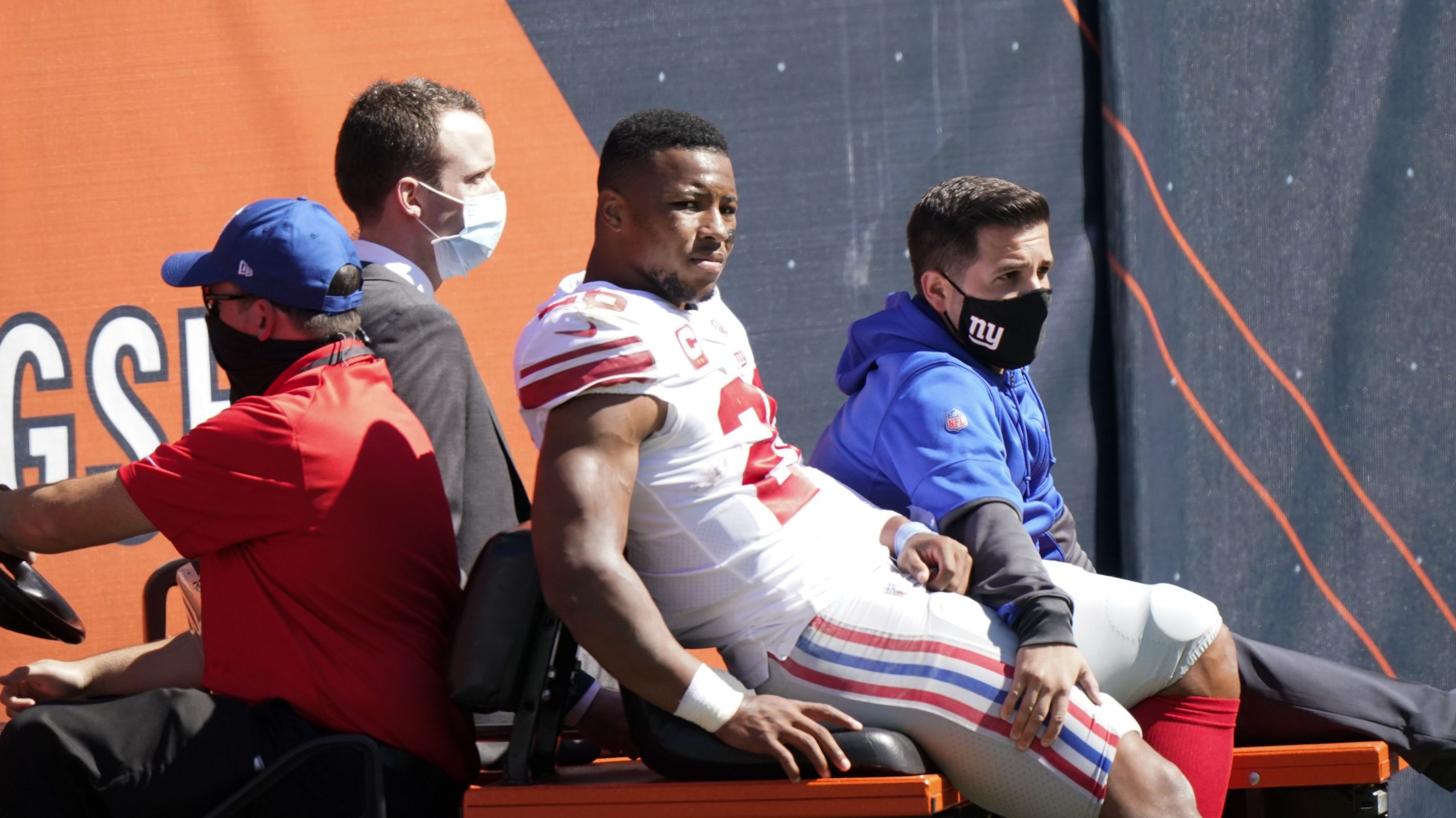 The New York Giants made a late charge yesterday only lose to the Bears 17-13 in Chicago. The fan base is in a bad place for obvious reasons.

Running Back Saquon Barkley is on the minds of every player, every coach, and every fan today as he tore his ACL in the loss to the Bears on Sunday. While Barkley is a physical freak and the comeback could be monumental, the hole he leaves on the team is daunting.

This leads to the return of the Gettleman hate. Somehow Beal opting out, Baker robbing people at gunpoint, Jones turnovers, Barkley’s ACL and now Shepard’s toe injury is his fault…the easy punching bag.

The State of the New York Giants is this EASY

The youngest team in the NFL does not know how to win, how to rally, or how to finish. Period.

Without pre-season, camp fights, smacking the hell out-of-one another, and position battles, this is a practice squad team built off inner-squad scrimmages, drills, and guys that can play specials teams.

Covid-19 and the state of our country have people hanging onto football as the savior for the challenges in everyday life. Sadly, The New York Giants are going to need more time to develop into a winner. Most of us project winning because head coach Joe Judge commanded that respect. And the fans gave it to him. But now what?

The New York Giants do not need more change. Change brings uncertainty. Change brings starting over, and an even steeper learning curve for a team that was basically going to English class in the last 48 months. If Barkley was healthy and rushing for 100 yards a game, Jones and his turnovers would be nothing more than a nuisance.

This team does not have a DeAndre Hopkins, Larry Fitzgerald combination, nor does it have Bud Dupree and TJ Watt combination to lean on.

For years under Gilbrides ridiculous passing scheme, Eli turned the ball over in bunches and Tiki Barber was fumbling like it was his job. The young fans don’t remember that. We have been here before.

The difference in 2020 is the years of losing have surpassed any expectations. Even the most patient fans are beginning to see the Giants starting to look like Detroit and Cleveland. The mainstream media and social media are very loud, creating a noise that’s hard to ignore.

Barkley is the face of the franchise and one of the most marketable guys in the NFL. He was the guy appointed to take the team into a post-Beckham, Eli era. However..like Lawrence Taylor, Michael Strahan, Phil Simms, and Victor Cruz, legends get hurt and they come back.

When you lose the engine of your team, the rest of the team can’t replace the production. Especially how heavily the team relied on Barkley. The next man up is fine for a team that has seen some success. The Giants and their fan base are tired of the RA-RA. They have endured Jerry Reese, Marc Ross, Ben McAdoo, Mike Sullivan, James Bettcher, Pat Shurmur… all asleep at the wheel.

Barkley and Slayton are the only two stars that have produced week in and week out since they have been with the team. Whether you like it or not, Jones is still developing. It took Eli Manning 10 years to realize he should slide when scrambling and when he did figure it out…it was awkward.

Judge has a long term commitment from the Mara/Tisch group. They want to believe in how he is building and coaching this team. The fan base overall likes him and the direction the team is going.

However, the constant losing is daunting. Year after year the Patriots, Seattle, KC, and Dallas find ways to sign, resign, trade for players that make an impact. No more next man up.

The Giants will struggle to compete without Saquon Barkley and the entire running back by scrub committee will not nearly be enough to make more losing palatable.

The Giants need to add something. That special “workhorse” does not look like it’s on the current roster, especially after watching Lewis drop a routine ball yesterday. The Giants should step up and make a move. For once, show the fans base you are not willing to go quietly into the night.

If the Giants economically can not make a trade or the talent is not there, I vote for force-feeding the ball to Gallman, find out what he can do. Do not tell the fan base that Lewis is the answer. We already have to live the “DOWNS” experiment.

Coaching ASleep at the Wheel:

Graham needs to wake up. At the end of the game with the Giants needing a big stop the two Defensive Linemen in the game are: BJ Hill and Austin Jackson? Come on! The Bears ripped off 21 yards running right at Jackson. I’m sorry, enough with how great your hybrid scheme is. Enough with the stats and this situational football. SMASH MOUTH. That is what Giants football has always been. This isn’t Green Bay or Miami. Someone, please put on a highlight film of Tuck, Strahan, Banks, Marshall, or LT.

Never!! Would Belichick lineup Austin Jackson and BJ HIll when Dexter Lawrence, and Leonard Williams are on the bench with the game on the line. Less ego…less hybrid…more Giants Football.

Garrett. Totally behind this signing, however, this offensive roster is young and needs momentum. They need to be put in the best position to win..they are not vets with the desire, passion, and pride to win. They are ONLY focused on not making a mistake.

They need to play fast, have fun, and build momentum. Without Barkley…this offensive line will see very little wins, unless the Giants go get a professional running back that can make a difference.

For the love of god, add in some quick toss, jet sweeps, bubble screens, pitch backs, rollouts, and more. Someone, please be creative.